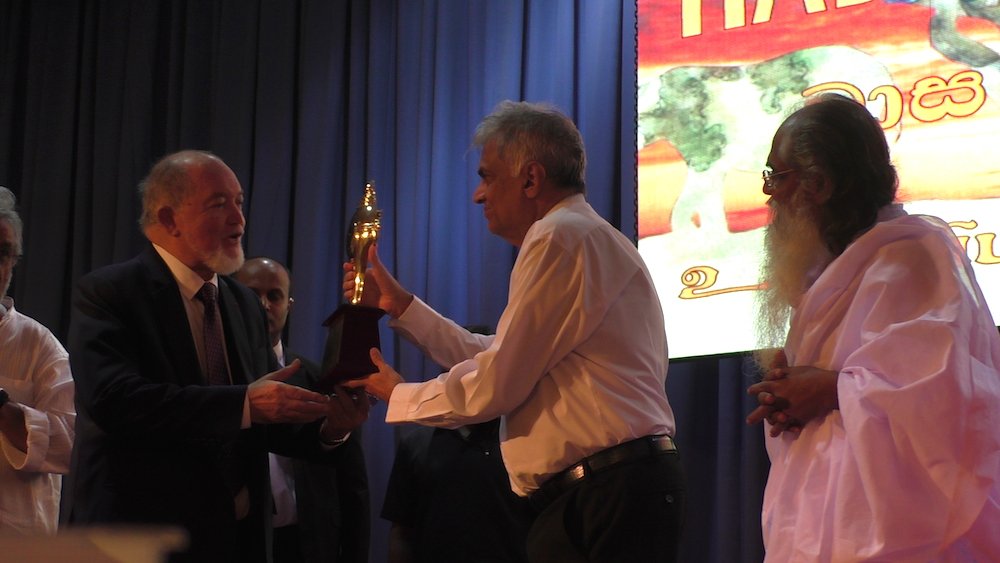 The Global Energy Parliament, co-organized by the Isa Viswa Prajnana Trust and the Interfaith Coalition for Peace of Sri Lanka, held an international session of parliament in Colombo. The Hon. Prime Minister of Sri Lanka, Ranil Wickremesinghe, inaugurated the function at his residence, Temple Trees.

This 7th session of Global Energy Parliament was conducted on the theme, “Habitat Harmony,” following the UN Habitat III conference in Quito, and included members and ministers from all sectors of society, to arrive at holistic, scientific and rational solutions for creating global harmony in habitat.

“If you want to achieve development, we need to maintain environmental, habitat, religious and ethnic harmony,” said Mr. Wickremesinghe.

GEP Founder His Holiness Swami Isa gave the Founder’s Address, saying “Without knowing what it means to be human, without knowing the science of creating habitat, we cannot achieve any lasting harmony—in home, society, nation or world. This is our work today.”

Swamiji gave a detailed proposal to the Parliament about how to achieve Habitat Harmony. One of his main points was to look more to the energy of building materials and shapes, and matching it to the human body. He said that houses should ideally be made of a majority of natural material. Since trees are the only quickly regenerating source of material, Swamiji suggests that any new building should plant 5 hard wood trees for every 2 cents of land, and the building itself should consist of 80% wood.  Other suggestions included mandatory tree planting for every tree that is felled; and trees and bushes planted along every road, lane and highway.

The Global Energy Parliament was conceived by His Holiness Swami Isa as an international assembly of volunteers who have a right and a responsibility to the world.  The Interfaith Coalition for Peace of Sri Lanka was the local co-organizer, and the event received support from the UNESCO’s World Academy of Sciences (TWAS).

The Hon. Prime Minister presented the GEP 2016 Lifetime Achievement Award to Sir James Mancham, the founding President of the Republic of Seychelles, for a lifetime of dedicated service to global peace. Two books by His Holiness Swami Isa were also released at the function: “Education for Total Consciousness,” published by IVPT, and “Saphalamee Atmeeye Yatra (End of a Divine Journey),” published by the Kerala Bhasha Institute.